All About The Solstice

It’s All About The Winter Solstice

It’s that mystical time of the year when the shortest day and the longest night fall in the Northern Hemisphere. In Welsh, they call it Alban Arthan (Light of Winter), but most English speakers refer to December 21st to 22nd as the Winter Solstice.

Wren hunts also signified the death of the Holly King. In Ireland, Wales, and the Isle of Man, Lá an Dreoilín, (Wren Day) was celebrated on December 26.  Wren-boys dressed in masks or straw suits, and usually rode a hobby horse covered in a sheet. Strings controlled the hobby horses, when pulled, their mouths closed, and their legs kicked. Wren-boys were led by a boy dressed as a male captain and a boy dressed as a female captain. These boys hunted and killed a wren as a tribute to the light for overcoming the dark. They’d lay the dead wren in a box decorated with evergreens on a pole and go from house to house asking for food and good cheer. The wren was buried at the end of the rounds. Nowadays they use a fake wren instead.

In Wales, both the Holly King and wrens were associated with the Welsh god Bran. Holly and Ivy are also linked to Bran. For the Winter Solstice, Yule logs were brightly decorated with holly and ivy.  Ale or mead was sprinkled over the log before it was lit. It was kept slowly, yet steadily burning for 12 days in the fireplace. To pass the light on from one year to the next, the ancient Celts kept part of the unburned log safely to one side to use for lighting the next year’s Yule log. Also, they stashed the log’s ashes away until spring, at which time they mixed them with seeds, and scattered them on the fields, spreading the blessing contained in the Yule log over the land.

Mistletoe and oak were sacred to the ancient Celts. As an evergreen plant, Mistletoe symbolized continued life over the dark cold winter. That is why druids picked it from oak trees five days after the new moon following the Winter Solstice. One druid climbed the tree and cut the mistletoe with a sickle, while others held an open sheet beneath him to catch the sacred plant since it was taboo to let it touch the ground. The druids handed out sprigs of mistletoe to tribesmen who hung them over entranceways for protection. Mistletoe is also believed to be an aphrodisiac, so this might be where the holiday tradition of ‘kissing under the mistletoe’ originated.

And last but not least, a highlight of the Winter Solstice was a grand feast. The Celts’ livelihood depended on what they could raise, grow, or hunt. So, the long, cold days of winter were hard on them. Since they didn’t have enough grain to feed all the cattle during winter, many were slaughtered at this time. This meant fresh meat for the winter solstice feast. Also, ale and mead brewed during the year fermented by this time and were ready for drinking.

We can draw on these ancient traditions and create our own modern Winter Solstice adventures and celebrations for our families and friends. Some simple ideas are: 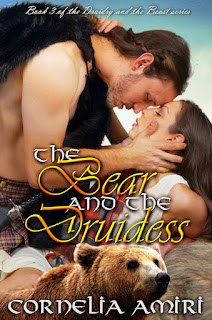 Or read a Winter Solstice book.
In the Bear and the Druidess, Cornelia takes her readers back to a Celtic Iron Age celebration of the Winter Solstice.
Posted by cornelia amiri at 6:31 AM