Facts About the Summer Solstice That Will Impress Your Friends

The summer solstice is the longest day of the year and the shortest night. In the Northern Hemisphere it occurs between June 20 and 22, depending on the year. Solstice is Latin from sol (sun) and stitium (still). Going back to prehistory, people noticed the sun stopped moving in the middle of summer then began tracking southward again as summer turned to autumn. Observations of the Summer Solstice may have begun with Neolithic humans using it as a marker to figure out when to plant and harvest crops. 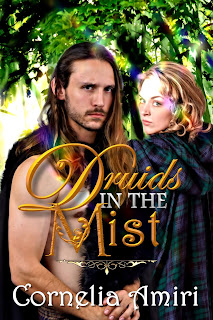 My Duology of Druids In The Mist and The Warrior and the Druidess is set in 1st Century AD when the Druids let the Summer Solstice Celebration.

I write a lot of Celtic Romances among other fantasy romance books and the Summer Solstice was Celebrated by the ancient Celts. They called it Alban Hefin, which means the 'The Light of the Shore' or 'Light of Summer'. Celebrating the longest day of the year involved a lot of feasting and dancing around bonfires. The iron age Celts lit bonfires on top of hills, at crossroads or in large openings like fields. These tall, blazes were symbolic of the sun. And, midsummer fell halfway through the growing season. The Celt’s believed the fires would boost the sun’s energy and guarantee a good harvest for the fall.

Posted by cornelia amiri at 9:57 PM No comments: