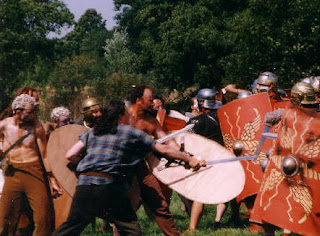 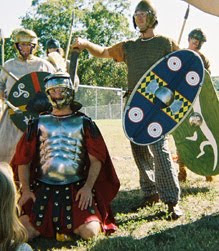 It's a historical day, and you all know how I love history. Today is the day Brutus assassinated Julius Caesar.

Gaius Julius Caesar was born in 102 or 100 B.C. in the month of Quinctilis, now called July in his honor. His motto was "Veni, vidi, vici" I came I saw, I conquered. Not something you would expect a priest to say. Which is probably why, as a teenager, Caesar left his position as high priest of Jupiter.

Several events followed which shaped Caesar into a solider, politician, and emperor. His attitude about politics was greatly affected when in he married Cornelia, daughter of L. Cornelius Cinna, one of Sulla’s greatest enemies. When Sulla overthrew the Marian party in 81 BC and assumed dictatorship he tried to kill all his enemies, including Julius. Caesar decided that it was a good time to leave Rome.

So at the age of 20, he went to fight in the eastern campaigns and was rewarded with the highest military decoration Rome could bestow. An incident which revealed the type of emperor he would become took place in 75 BC. While traveling by boat to Rhodes to study oratory, Scythian Pirates, the scourge of the Mederanian, attacked and overran his ship. Caesar sent his staff to gather the ransom the pirates demanded, fifty talents of gold. During the 40 days that he was held by the pirates he often warned them that when he was free he would crucify them. He always smiled when he said it. The pirates laughed at the outrageous threat. But as soon as he was released, Caesar took a ship and a small force of men, tracked down the pirates, and hung them on crosses to die in the blistering Mederanian sun.

Though physically fit and robust Julius had epilepsy but instead of weakening him the malady strengthened his resolve for power and control. He also had a well-earned reputation as a ladies man. He was tall, handsome, of fair complexion, with firm, shapely limbs, and dark, unfathomable eyes. He was a sharp dresser, usually attired in a tunic with a broad purple stripe and long fringed sleeves that hung to his wrist.

He seduced many illustrious women. But his most famous tryst was with Cleopatra, who came to him rolled up in a carpet. He even called her to Rome and did not let her leave until he had bestowed rich gifts upon her. He allowed her to give his name to the child, which she bore. According to many Greek writers of the time, this child looked just like Caesar. But his great love was Servilia, the mother of Marcus Brutus. He gifted her with a pearl so large and lustrous it cost six million sesterces.

Julius stretched the boundaries of Rome by conquering Gaul and invading Britannia. At home he maintained his power by defeating his friend and rival Pompey. Caesar gained so much power traditionally held by the Senate that the senators felt threatened and conspired against him.

Caesar’s astrologer, Spurinna, told him there was danger but, if he took care on the Ides of March he would be safe. At first, Caesar decided to stay in his bedroom chambers on the 15th of March. However, his friend, Brutus, convinced him that the astrologer was wrong so he went about his daily business. On his way to the Senate, Caesar ran into his astrologer and told him "The Ides of March are come." Spurinna said, “Yes, they are come, but they are not past." Later that day Caesar was assassinated in the Pompey Theater, at the foot of Pompey's statue. He is remembered to this day as the greatest emperor Rome ever had. We still call the 7th month July in his honor.

These pictures of Romans and Celts are snap shots I took of reenactors at the Austin Celtic Festival. I have three books set during the days of the Celtic/Roman battles: Druid Bride, Druid Quest, and Timeless Voyage.Read more about them at http://CelticRomanceQueen.com

Here is a Book Trailer for Druid Bride:

Please comment or ask a question below. Happy Ides of March, everyone!
Posted by cornelia amiri at 8:57 PM 1 comment: