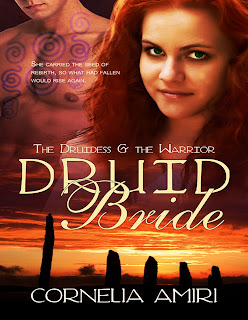 Lughnassadh, pronounced LOO-nahs-ah, is the Celtic Harvest festival, celebrated July 31 or August 1st. Named after the sun god Lugh, a tall, muscular warrior with sky blue eyes and a hallo of golden light which blazed around his thick flaxen hair. He was also known as Lugh of the long arm because of his magic spear, which never missed its mark. The earth goddess of Lughnassadh is Tailtiu in Ireland and Blodeuwedd in Wales. The difference between the two is shown in the Welsh and Irish versions of the tale of Lugh or Llew.

The Irish version begins with forbidden love between Cian, a Tuatha De Dannan and Eithne, a Fomorian. Eithne's father locked her in a high tower. With the help of a druidess, Cian flew on a cloud to the tower and climbed in Eithne's window. Nine months later they had twin boys. Eithne's father threw the babies into the sea to waylay the chief druid's prophecy that his grandson would defeat him in battle. Though one baby drowned, the other swam away. The sea god, Mannanann MacLir, found the babe and gave him to a warrior woman, Tailtiu, pronounced tell-shuh.

After Tailtiu taught him everything she knew, the boy, Lugh, went to Tara, the hill fort of the Tuatha De Dannan. The porter asked him what skills he had to offer. When he said he was a warrior the gatekeeper told him they already had warriors. Lugh continued, saying he was a healer, then a smith, and so on. Each time, the porter said they had someone with that skill. Finally Lugh told him if they already had one person who could do all those things, he would leave. The gatekeeper let him in and Lugh became King of Tara for a year and a day.

Leading the Tuatha De Dannan in battle against the Fomorians, Lugh struck the Fomorian's evil eye with his slingshot. When the rock hit the evil eye, it looked at Lugh's grandfather, Balor. As the evil eye killed all within its sight, Baylor died instantly. Thus the Fomorians were defeated. But Lugh's foster mother, and a royal lady of the Fir Bolog, Tailtiu, had to clear a vast forest to plant grain for her people. She died from the strain and exhaustion. Lugh ordered a fair, with feasting and funeral games, be held each first harvest, in her honor, the Lughnassadh.

In the Welsh version, The high druid, Math the Ancient, brother of Don, needed to appoint a new virgin to sit by Don's throne so he could place his feet in her lap to keep them warm. The god Gwydion suggested Arianrod, keeper of the circling Silver Wheel of Stars. Math preformed a magical test to see if Arianrod was indeed chaste. And when he touched her belly with his finger, the goddess began to cry out with labor pains and right then and there she gave birth to two sons, proving she wasn't a maiden. One was a sea creature. Math named him Dylan and threw him into the sea. The other baby was a large unformed lump. Gwydion took him and put him in a dark, dry chest. There he grew into a beautiful boy. Arianrhod gave that baby three geases or taboos. She would not give him a name, nor weapons, and he would have no human wife. No one else could give him these three things men need.

When it was time for the boy to have a name, Gwydion disguised the boy and him as cobblers. As the boy mended Arianrhod's shoe, a bird flew overhead. With his slingshot, the boy shot the wren with a single stone. Impressed, Arainrhod exclaimed, Llew Llaw Gyffes, which means the little one has many skills. As Gwyidon took off his disguise, he told Arianrhod she had named the boy. Then her hill fort fell under sudden attack and she gave Llew weapons so he could help her fight. Arianrhod told Gwydion though she had been tricked into naming and giving arms to Llew, she would never give her son a wife. Math and Gwydion conjured Llew a wife out of flowers. Her name was Blodeuwedd, pronouonced Blod-Eye-With. The festival of Luchnassah celebrates the wedding of the Welsh Earth Goddess to the Sun God Llew.

Bloddeuwedd represents the earth Goddess, wanting the blood of the god king to fertilize her soil. Llew shape shifted into an eagle and flew away. Gwydion found Llew and changed him back. Then Gwydion changed Bloddeuwedd into an owl so she would only show her face at night.

During the Bronze Age, Lughnassadh included choosing a god king, a king for a year and a day. God kings represented the fertility of the land, which had to be stopped to allow ripening to take place. So the God Kings were sacrificed in honor of the Earth Goddess and to help their people. Thousands of years ago, sacrifices were replaced with other traditions.

As Lughnassadh celebrates the marriage of the earth to the sky, hand fasting marriages were celebrated at this time. Single men lined up on one side and unmarried women on the other. They paired off and married for a year and a day. The couple had to return to the same place the following year to make their marriage permanent. They could also divorce the following year at the festival by simply standing back to back, facing north and south, and walking out. Going their separate ways. Single once more.

An important part of Lughnassadh was the harvest of corn, wheat, oats, and barley, as well as fruits like berries and grapes. A loaf of bread made from the new corn was dedicated to the goddess. The tribe's chieftain or druid may have taken loaves of fresh baked bread, broke off pieces, and handed them to each member of the tribe as they walked sun wise around a large bonfire.

Fruit gathering was also part Lughnassadh. Young men and women paired off to pick bilberries and didn't return until nightfall. The boys thread berries into bracelets for the girls. Before going home, the girls took off their bracelets and left them on the hillside. After climbing back down the hill the young men participated in games such as horse racing. The White Stead is a common companion of Lugh. The horse is the embodiment of the Goddess of Sovereignty who delivered spirits to Otherworld. In the coastal lands, people drove horses down to the beach and into the sea on Lughnasadh.

To celebrate Lughnassadh at your home, make a centerpiece of dried wheat sheaves, whole grain breads, acorns, hazel nuts, and grapes. Get the whole family involved in baking homemade bread. Say a prayer, thanking god for the harvest or the bounty of food you have year round. Share your Celtic heritage with others at the table by telling them the story of Lugh or Llew.

Excerpt (Druid Bride):
Everyone stood as the druidess entered and held her arms out to them. “The moon has risen. It is time to begin the ritual.”

Her two guards, as well as Calach, Brude, Ciniatha, and the other nobles gathered in a circle around the druidess. A glow of warmth filled her, as if family gathered around her, taking comfort in rituals and traditions. She loved
conducting celebrations more than all the other duties of a druidess.

Tanwen spread her arms wide. “Lleu Strong Hand, god of sun and war. We the druidess, chief, and high nobles of the Caledonii give thanks for the bountiful harvest. For the light you shone on the crops, we honor you. Our bellies will be full, even in the dark of winter.” A warm, soft, purring-cat vibration began
in her chest and spread to every pore in her body.

As Tanwen beckoned Ciniatha to step forward with the first baked bread, she chanted, “Shining One, Lleu of the sure hand, we come together to share our first baked loaf. For as you honored us with a fruitful harvest, we honor you with our labor in reaping, threshing, and baking.” With her arms raised high, Tanwen invoked, “Great Goddess of Lughnasa, Blodeuwedd, you give us seeds for sowing. Your womb of earth birthed our wheat, which gives us life. From your bounty, we glean the first grains, to bake the first bread, and to brew the first ale.”

Ciniatha handed Tanwen the loaf. She broke off a piece and handed it to Calach, who tore off another and gave it to Brude, the third to Ciniatha, and in turn to each member of the noble ranks.

She gave Huctia and Gethin one piece each. Her heart clinched. She wanted to reach out and hug them. They were like her family now. As she performed the ceremony, she thought of the druids who had taught it to her, Rhys and Sulwen. She missed them so much, and the entire Silure tribe, who gave her succor and sanctuary. She gulped, smiled at her guards, and then continued the ritual.

She tore her remaining `hunk of bread into two pieces and shook them in the air.
“Goddess of seed and flower, as you give to us, we give to you. Accept our offering. Lleu, Sun King, Lord of Summer, we partake of this sacred bread, which ripened under your sultry heat. So the tribe will be bountiful, live long, and sire many children. God and Goddess, as you, the earth and sun, conceived our grain, we bless you. We call on you to bless our tribe, as we share this bread.”

Tanwen tossed a piece of bread into the central hearth. As it burned to a crisp, the smoke curled and rose to the gods. She let her sadness over leaving Sulwen and Rhys, and the deaths of her family, melt away. This was her new tribe, and she loved them.

She led the chief’s household and her two guards in a circle around the central hearth as she chanted, “Earth gave us life. Death returns us to her womb. Unending, the circle runs forevermore. Sun, earth, and grain: all which falls shall rise again.”

And that is why I’m here, Tanwen realized. She symbolized two great tribes destroyed by Rome, yet with Brude, she would make a stand to keep the brutal foreign force from Caledonia’s borders. She and Brude would see to it that no Pict tribe would be annihilated. And her descendants would teach the Celtic ways to those in the future, who after accepting foreign beliefs, would come to forget their ancestors. In that, she was like the goddess: she carried the seed of rebirth, so that which had fallen would rise again.

Now, she was hopeful for this marriage. A soft, warm feeling rose in her and spread its hopeful glow through her body. She knew her face had broken into a smile. Boudica was wise and had led her to the right tribe, the right man. Her new tribe, the Caledonii, would not be annihilated by Rome, as her mother’s and her grandmother’s. She and Brude would rouse the northern tribes to fight the Romans and win at last, keeping her new tribe and her future family—the children she would have with Brude—safe and free of Rome.

At that moment, her eyes were caught in Brude’s fiery gaze. He wanted her, and she wanted him. The gods had made it so. Tanwen stuffed the piece of bread into her mouth as the others did the same. The soft warmth melted on her tongue as she chewed. It was so delicious, so filling...so blessed.

Happy Lughnassa everyone. Leave your email with your comment to win a free PDF eBook of Druid Bride.

For more books on Long Swords, Hot Heroes, and Warrior Women visit CelticRomanceQueen.com
Posted by cornelia amiri at 5:08 AM 4 comments: