Samhain/Halloween And The Old Gods

As an author of Celtic Fantasy Romance novels, my favorite holiday is Samhain, the Celtic fire festival which gives us our Halloween traditions. Samhain, pronounced SOW-Kuhn, is the Celtic New Year, October 31 or November 1st. Samhain falls between the old year and the new—it's a day without time. Spirits of the dead and supernatural beings easily cross into ur earthly dimension on this day, since the veil between worlds is at its thinnest.

In our modern Halloween celebration, one of our favorite supernatural creatures are werewolves. The ancient Celts liked shapeshifters probably even more than we do. All their gods had shapeshifting forms.  For instance, let's look at the Welsh god, Gwydion. That name means born of trees, which sounds so druidish, and for good reason, he's basically the druid of the gods. Along with that, he's a powerful sorcerer, a master of illusion, a poet,  the world’s best story teller, and a trickster. When god Math needs a virgin handmaid to because he has to lay his feet in her lap to keep them warm, Gwydion tells him he has the perfect woman, his half-sister Arianrhod. But it’s a trick because he knows she’s no virgin. Math test her virginity by touching her stomach with his magic wand and two babies drop out. One is a sea creature, the sea god Dylan, they set him into the ocean. The other is a lump and Gwydion takes it and a few months later it has formed into a beautiful baby boy, the sun god Llew. Gwydion raises Llew and uses his trickery to thwart the three tyngeds that Arianrhod put on him.

This is one of my favorite stories in Welsh mythology. Also, one of Gwydion’s shapeshifting forms is a wolf.

Gwydion is the hero of The Wolf and the Druidess. It’s set at Samhain rather than Halloween and instead of a werewolf, the hero is the Celtic god Gwydion. It’s my version of a sexy, romantic, Halloween werewolf tale. And it does have a Little Red Riding Hood vibe. 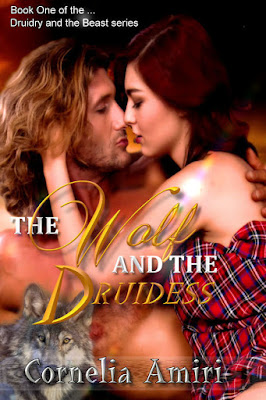 Here’s the blurb:
A Celtic Tryst with A Shape Shifter Twist
In days of old, deep in the dark woods, Druidess Seren discovers a wolf shapeshifting into the bare, muscular Celtic God, Gwydion. Seren's mind turns from the Samhain feast to wicked thoughts of Gwydion's gorgeous body Is the love Gwydion and Seren share strong enough to overcome barriers between an immortal god and a mortal woman? Or will a warning of danger from beyond the grave destroy the sensual magic brewing between the wolf and the druidess?
Another special thing about this book is it's first-in-series. The Druidry and the Beast series is set in Iron Age Britain. And each one takes place during one of the ancient Celtic festivals. Plus, the hero is always a shapeshifter god, and the heroine a smart, strong druidess. All the druidesses are from different tribes, so you get to know a little about the tribal culture of those times.
The series is complete, so you can read the books one by one: 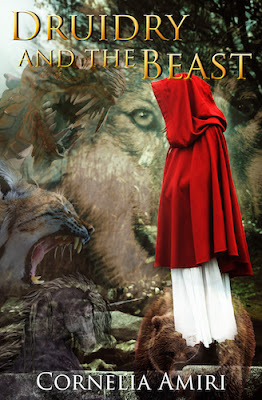 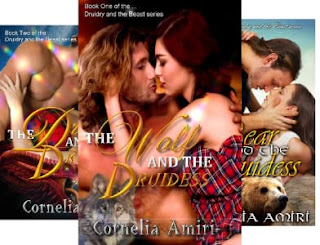 Posted by cornelia amiri at 5:00 PM