My new release The Lynx and the Druidess is the fifth and final book in my Druidry and the Beast series. Each book takes place in Iron Age Britain among one of the tribes. The ancient Celts were self-sustainable and fully green. Each book is set during one of the Celtic festivals and the Lynx and the Druidess takes place during Lughnasa. That is the harvest festival held around this time of the year, in August. Fruit picking is a wonderful Lughnasa family activity. And, there is a lot of bilberry and apple picking going on in my book. Here in Texas, where I live, apples are available for picking in August. You can also get them at all the grocery stores.

Here is a favorite recipe of mine for a yummy August or Lughnasa treat – Apple Crisp
Peel and chop or thinly slice 8 apples of your choice (Granny Smiths are recommended)
Preheat the oven to 350 F.
Rub butter or use non-stick cooking spray on an 8” by 8” baking dish
Stir apples, a 3/4 tsp of cinnamon, Tbsp granulated sugar, and 1 1/2 tsp of lemon juice together in a bowl and pour into the baking dish.
For the topping, dice 1/2 cup cold unsalted butter into small cubes. In another bowl whisk the butter cubes, with 3/4 cup old fashioned oats, 3/4 cup all-purpose flour, 1 tsp cinnamon, and a pinch of salt.
With a whisk, two forks, pastry cutter, or your clean hands cut the butter into the mix until it resembles pea-size crumbs.
Spread this over the apple mixture in the baking dish, patting softly to even it out.
Let it bake for 40-50 minutes, until golden brown.
You can add a scoop of vanilla ice cream or whip cream and caramel sauce to each serving. 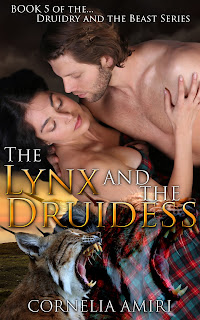 The Lynx and the Druidess
The Druidry and the Beast Series
Book Five
Cornelia Amiri
Genre: Fantasy Romance
Date of Publication: July 1, 2020
ASIN: B08BNNFWBF
Number of pages: 94
Word Count: 22,600
Cover Artist: Kyra Starr
Tagline: Loving a god has its advantages
Book Description:
Lleu, the radiant sun god, crosses between worlds to the Silures village for the fierce and stunning druidess, Wendolyn —a woman worth battling for. He longs to celebrate Lughnasa, the festival that honors him, with her.
Wendolyn is captivated by the striking stranger the moment he wanders into her village. Furthermore, she wants him with a fervor, burning her from within. However, he’s hiding his true identity. When he vows to save her tribe from the Romans marching toward them, everyone, including her dead father in a dream, says he is a coward who has run off.
Lleu is determined to win the love of druidess Wendolyn even if it means fighting the Roman army singled handed—by shapeshifting into in his lynx body.
Will her tribe survive the Romans? And, can Wendolyn and Lleu’s relationship survive her tribe’s mistrust of him?
Amazon          Universal Link
Excerpt:
With her heart hammering, Wyndolen stared with wonder at Lleu’s luscious nude body. She only glanced away long enough to pull a white robe, speckled with gold, out of the chest in the corner. She tugged it on, then fastened a plaid cloak over it with a round silver broach and latched her gaze onto Lleu again while he slipped his clothes back on.
They left the roundhouse and walked hand in hand to Cynfor’s home.
She called out to the woodmaker, “It is time.”
Cynfor stepped out, clutching an iron rod and the wheel of the year coated with gooey tar.  As the three walked together to the center of the village, men, women, and children gathered around the druidess, muttering, “Lleu,” and “coward.”
Scanning the angry faces in the crowd, Wyndolen sighed. If only they knew the truth about him. But she couldn’t blame them, she was as guilty as they were. She hadn’t recognized he was a god, even after he’d told her. No, he had to show her his magic spear and reveal his dazzling aura. Now the others needed to learn the truth.  Tonight, at his festival, she would announce who he really was. But first she had to prepare her tribesmen for the news, to lessen their shock.
She held her palm upward toward the crowd and cleared her throat. “Hear me, I have a surprise for all of you. The presence of the god Lleu is here. You do not see him as he is in the guise of one of us. So, take care of how you treat each other, lest you offend the deity.”
Their expressions shifted from anger to shame as they were now all on their best behavior.
Taking graceful steps, she led all her tribesmen, chief, and Lleu to a cliff. Their chief proudly carried a blazing firebrand, and Cynfor held the sacred wheel with reverent hands. Everyone grew quiet and gazed down the mountain slope.
Wyndolen announced, “We have gathered this Lughnasa to observe the Wheel of the Year as it turns.” She raised her arms to the sky and smiled at Lleu as she chanted, “The sun burns, yet winter nears. The season turns. Summer comes to an end. Sun and earth, life to death the wheel turns, Lughnasa, Lughnasa.”
She took the torqueh from Corio, handed it to Lleu, and he lit the wheel of year aflame. Cynfor handed Wyndolen the iron rod. Then, the sun god, Lleu, ran beside her, on the other side of the flaming wheel, as she used the rod to roll it down that part of the mountain slope.
She chanted, “God of the sun, the wheel has turned, the yearly end of your reign has come.”
Smoke rose, as flames ate the wood. The wheel reached its end at the foot of the slope and crumbled into ash and burning fragments. The crowd stopped in their tracks and circled the symbol of the dying Lleu. 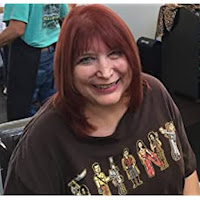