Lleu of the Lynx and the Druidess

Today I’m interviewing the hero of The Lynx and the Druidess, who is the Welsh Sun God, Lleu, pronounced Lou. 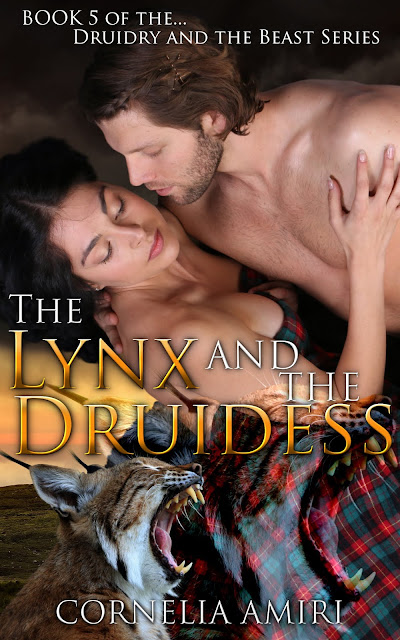 Lleu since you are the hero of a romance book, let me ask you what has been your best or worst date?

“Well, we ancient gods don’t really date in the way you modern mortals do. But my worst relationship with a woman was with my wife Blodeuwedd. It all began with a tinged (that’s kind of like a curse or a rule) that my mother the goddess Arianrhod put on me which prohibited me from having a wife. So, gods Math and Gwydion conjured a wife from me out of flowers and named her goddess Blodeuwedd.  I thought the marriage was going well until she and her human lover tried to kill me.  I survived. And god Gwydion, my uncle, turned Blodeuwedd into an owl to punish her. Now, the best relationship I’ve ever had with a woman was with Wyndolen.”

She’s the heroine of your story, The Lynx and the Druidess, right?

And how did you meet?

“The first time I saw her, I scried her by peering into the pond of the wise salmon in the Otherworld. Fire coursed through me as I watched this dark-haired enchantress. swirl in a rhythmic dance, winnowing the harvest by holding her wicker basket high as husks and kernels leaped up from the bottom of it and the wispy chaff caught by the breeze floated above her.”

She sounds gorgeous and graceful. Now, I ask many people this next question, which is if you could be an animal which one would you be? But, in your case, you actually have transformed to other animals and the Lynx is the creature associated with you the most? Why do you like shapeshifting into a lynx?

“There are so many things I love about the majestic lynx. One thing I admire the most is that they are mighty hunters. I love to hunt but I can’t compare to the skills of a lynx when in my human form. Even in deep snow they can maneuver their environment well and capture their prey. And in the dense forest, they are as stealthy as shadows and use the element of surprise. Also, many Celts call them Llewyn, naming them after me.”

And, you also have a huge Celtic festival named after you? Tell us about that.

“Lughnasa which is pronounced (LOO-nuss-uh) takes place in August, to celebrate the first Harvest and to honor me, god Lleu. Food is more abundant at this festival than any other, due to the harvest, so there is a great feast. It is often a time when many couples get married. One Lughnasa tradition is to pick ripe bilberries and string them into a bracelet for your lover. The British Celts would also fashion a wheel of the year, set it aflame, and the druid, using an iron rod, would roll it down a hill, chanting something like, God of the sun, the wheel has turned, the yearly end of your reign has come. The sun begins its journey, winter nears. The season turns, sun and earth, life to death. Lughnasa, Lughnasa. But one of the biggest events of the festival was the huge summer bonfire that brought it to a close each year.”

“It sounds exciting and on that note, I’ll bring our interview to a close. And Lleu thank you so much for visiting with us today.

The Lynx and the Druidess
The Druidry and the Beast Series
Book Five
Cornelia Amiri
Genre: Fantasy Romance
Date of Publication: July 1, 2020
ASIN: B08BNNFWBF
Number of pages: 94
Word Count: 22,600
Cover Artist: Kyra Starr
Tagline: Loving a god has its advantages
Book Description:
Lleu, the radiant sun god, crosses between worlds to the Silures village for the fierce and stunning druidess, Wendolyn —a woman worth battling for. He longs to celebrate Lughnasa, the festival that honors him, with her.
Wendolyn is captivated by the striking stranger the moment he wanders into her village. Furthermore, she wants him with a fervor, burning her from within. However, he’s hiding his true identity. When he vows to save her tribe from the Romans marching toward them, everyone, including her dead father in a dream, says he is a coward who has run off.
Lleu is determined to win the love of druidess Wendolyn even if it means fighting the Roman army singled handed—by shapeshifting into in his lynx body.
Will her tribe survive the Romans? And, can Wendolyn and Lleu’s relationship survive her tribe’s mistrust of him?
https://amzn.to/30Seyah

Posted by cornelia amiri at 1:21 AM