Hello everyone, I have a real treat today, for all of us Historical/Romance fans. Award Winning Author Jennifer Bray-Weber is with us today to tell us about her Romancing The Pirate Series and her life as a writer.
What a fabulous subject you’ve chosen to write about, pirates. Who doesn’t like a good pirate story? What is your favorite thing about pirates and writing about pirates?


I admit. I’m attracted to the dark side. Bad boys float my boat. (See how the pirate diva made a pun?) The more I researched pirates, the more fascinating they became to me. These treacherous people were quite democratic, governing themselves. They had laws. They didn’t break those laws without serious consequence from their peers. They shared in the booty equally. They elected their captains. They were survivors. They were masters of their trade. Though most were vicious and not too far off the mark of murderers, some were actually honorable. It was fun mixing what I learned with fiction. Thanks to Hollywood romanticizing pirates with characters like Captain Blood and Captain Jack Sparrow, among others, people relate and root for the bad boy pirate. I love being able to take a bad boy and make him irresistible and redeeming.
Wow, I am absolutely captivated now. What could be sexier than a bad boy pirate captain, redeemed by love? Tell me more. Tell us all about your Romancing The Pirate Series.
Love to. The series follows the courageous captains in a brethren of Caribbean pirates. Adventure awaits each of them and they greedily, if not enthusiastically, accept the challenge. But while these captains enjoy a good fistfight, sea battle, besting their enemies, or pillage, they are as different as the fish in the sea and as unpredictable as the currents. Zane has anger issues, Blade has a voracious appetite as a libertine, Thayer drinks far too much, Bran is cynical, and Joelle, well, she’s a woman. That’s curse enough. What’s a pirate romance without redemption? While these captains are masters of their trade, they are no match for the women (and sexy male slave) who steer them into uncharted waters—namely that of love.
The fun thing about this series is it will come full circle. In most of the books, the pirate ship Rissa is central. In the final book, the Rissa sinks. *sniffles* But that’s not all. It will be a dueling story. Contemporary treasure hunters will find a diary (or logbook) and will try to unravel the mystery surrounding the ship’s demise and her missing treasure. At the same time, an adventure and love story unfurls as the newest Rissa captain and young pirate’s daughter navigate through a treacherous betrayal and identity crisis. Two stories. One novel. I get all giggly thinking about it.
It sounds like an amazing, breath taking ending for the series. I have to ask, of all the book you have written, do you have a favorite? 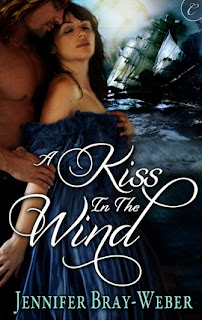 A Kiss in the Wind is my favorite. It has everything to do with Blade Tyburn, the pirate playboy. While writing this book, I finally understood what other authors meant when they say they fall in love with their characters. I had fallen head over heels for Blade—hard. The sun-kissed Casanova of the high seas, he spars with wit and innuendo. But what makes this alpha male delicious to me is how he handles Marisol, the knife-wielding thief who steals much more than his treasure.
A Kiss in the Wind blurb:
Marisol Castellan is in trouble—again. Against her pirate father's orders, she snuck off their ship to intercept a message meant for a rival captain, one that offers a clue to the whereabouts of her estranged brother Monte.
Pirate captain Blade Tyburn is not pleased to find the letter he's been waiting for is missing. He's even less pleased when he discovers the thief is a raven-haired beauty who bewitches his senses and muddles his thinking. The note gives the location of a silver-laden ship that'll make his fortune; Blade must find it, and if that means bringing Marisol along on the voyage, so be it.
Marisol believes Monte sails on the very ship Blade is to meet and strikes a deal with the handsome rogue. If he will give her passage to her brother, she will give him the exact location he needs. And both will get more than they expected.
Discover the pirates who seek fortune and who are steered into uncharted waters of the heart in the other books of the Romancing The Pirates series: 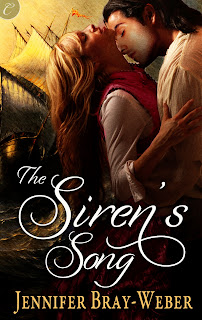 The Siren’s Song blurb:
Pirate captain Thayer Drake lures ships onto reefs for plunder, and business is lucrative. Yet, saving a lass from drowning after her ship wrecks becomes more than he bargained for when the crazy wench dives back into the raging sea for her blasted purse.
Tavern songstress Gilly McCoy, penniless and fleeing from the man who murdered her lover, stowed away on the doomed ship. Now at Drake's mercy, Gilly must earn her passage by performing for the captain. And that is not all: she must also kiss the captain at every ring of the ship's bell. But she discovers kissing the handsome rogue is not entirely a bad bargain...
Drake is intrigued by the beauty, but there is no room in his black heart for a woman. He has demons that he drinks nightly to forget. Meanwhile, Gilly has her own secrets to keep—including why her purse is more valuable to her than her life... 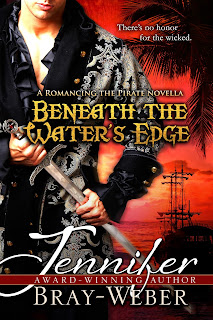 Beneath the Water’s Edge (a novella) blurb:
Elyssa Calhoun Montgomery had been willing to do anything to keep her father from debt, including following her new husband to the Caribbean-–dressed as a lad. But she never dreamed she’d become widowed so quickly, or that she’d come face to face with a fearsome pirate who expects her to fight like a man. Captured and her identity exposed, she doesn’t know what’s worse, being locked alone in a pirate captain’s quarters or experiencing an unsettling attraction toward him.
Captain Bran Blackthorn has grown weary of the pirating trade and seeks a King’s Pardon for his crew. Unfortunately, the man who could sign a reprieve, his half-brother Governor Flynn, would rather see him dead. When the gods—or the devil—bestows an angel to his spoils, he sees an opportunity to force a pardon with her ransom. Never mind his beautiful pawn has bewitched him, filling him with a desire to press his body against hers, capture her mouth in a searing kiss, and brand her as his own.
But when Bran’s enemies seek vengeance, Elyssa becomes entangled in their deadly game and Bran faces the gallows. Can they cheat death and save each other? Or will they be dragged...
Beneath The Water’s Edge. 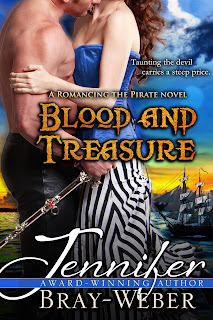 Jennifer Bray-Weber is giving away SWAG, PRINT, AND E-BOOK COPY OF "BLOOD AND TREASURE" Please comment below to enter the drawing, leave your email so she can contact you if you win.
Author Bio:
Award-winning author Jennifer Bray-Weber is a proud native Texan. She is a married domestic goddess and a stay-at-home mom to two beautiful daughters. Holding two degrees, one is Music and Video Business, the other in Liberal Arts, she has been able to express her creative thinking through a multitude of experiences.
Her interests include writing, reading, traveling (what she likes to call "research"), horseback riding, scrap-booking, shopping, relaxing at the beach, and playing games of darts.
Connect with Jennifer:
Website:
Facebook:
Twitter:
Pinterest:
Goodreads:
Click here -2013 Summer Author Blitz - see where to go next?
Drop by The Summer Author Blitz Facebook Event: July 26th at 3 PM
Posted by cornelia amiri at 7:46 PM