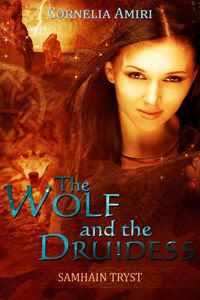 Red Riding Hood was recently adapted to film and fairy tales have been brought to Television this season with the prime time hit shows Grimm and Once Upon A Time on NBC and ABC. I’m a fan of both shows. I love the weird dark characters and the supernatural police crime mystery of Grimm. The creativity of blending traditional fairy tale characters and their issues into the contemporary world in such a believable way in Once Upon A Time is so intriguing. The evil witch is even more scary to me in her contemporary urban role as the mayor in a small town, with her cold hearted, controlling, self centered attitude. Looks like someone has already cut out her heart. It’s ingenious to me that Rumplestiltskin is the town’s Pawn Broker, Mr. Gold.

If you like movies and TV shows with a fairy tale aspect, you are sure to enjoy books with a bit of a fairy tale theme. My paranormal/romance novella, The Wolf and The Druidess will remind you a bit of Little Red Riding Hood. Though my contemporary/romance Peace Love Music is set at Woodstock rather than in the woods, you will notice the plot draws from Goldilocks and the Three Bears. My Medieval/Romance, The Celtic Fox, is reminiscent of Snow White.

Here is an excerpt of The Wolf and The Druidess:

From the eerie silence of the forest, a haunting howl ripped through the air. She stopped in her tracks. It sounded too close. A wolf hunting. There was better game than her. Knowing there was nothing for her to be afraid of, she remained brave, yet her body trembled. With her next steps, she kept her footfalls as light as possible, walking stealthily on the path, to not draw the beast’s attention.

When she came upon the clearing, she held the torch out and gazed at the large, smooth stones, piled one on top of the other. Her mother’s cairn lay in a pool of dried leaves. Her throat tightened and she swallowed back a sob as she moved closer. She couldn’t breathe. Heat radiated from the grave as if her mother stood there. Seren bore a hard stare at the stones as if to call forth the image of the tall woman, with a compelling oval face framed by shoulder-length brown hair.

“Mam...” Her voice choked. “I have brought a basket of Samhain treats.”

Though her mother didn’t appear, she knew she soon would. Her body quivered, not from fear but from joy bubbling in her. She shone the firebrand on an old oak stump in front of the cairn and plopped down on it. Seren stabbed the end of the torch into the ground, so she had light. Facing the cairn, she called out to her mother’s spirit.

“We have a lovely feast.” Seren pulled out a large red apple. She stood, stepped forward, and stooped down to set it on the pile of stones.

When she straightened, she gasped. There, by the oak, facing her, with naught between her and it, but the cairn, loomed a white wolf with pink-tipped ears. Seren stood transfixed. Her heart hammered at the look of hunger in his amber eyes, glowing like a Samhain fire.

Fighting her fear, she remembered her druid training, her knowledge of wolf lore. In a soft, soothing tone, she spoke. “Wolf, we live in peace, you and I and your kind and mine. On this eve of Samhain, it is best you stay with your pack. For those who appear human, this eve, may not be.”

She smiled and he seemed to grin back, but the flash of his white, jagged teeth roused her fears even more. She didn’t want those fangs sinking into her flesh. She took a deep breath. “Do not chew on me, there is better meat for you in the deep dark woods.” His pink tongue, hanging from his huge mouth captured her gaze.

As the beast jerked his neck back and howled, the haunting sound reverberated in the air. Slow and quiet so the wolf wouldn’t become alarmed, she took one step back. He wiggled his nose as if smelling her. Seren shivered as she gazed at his long snout. The looming wolf took one step closer. She could not outrun him. If she managed to trick him and get away long enough to hide, he would sniff her out.

“Wolf, look what I have for you.” Pulling out a black pudding link, she tossed it toward him. It landed in a patch of grass at his side. “Food.” She smiled. “Eat your food, wolf. It is good.”

The white wolf never turned its head. With his gaze fixed on Seren, he stared hungrily, as if he thought of her as a delicious treat. Seren blinked and wondered if it was all the tall trees amid the darkness and the shadows in the night that caused the beast to appear as if his form shifted. She clutched her chest. Her heartbeat quickened as the wolf’s fur and muscles twisted. The beast’s body emitted sounds like the creaking of joints but much louder. Watching the wolf’s body expand while other features contracted made her stomach lurch. She slid her hand from her chest to her belly. A voice in her head told her what she saw couldn’t be real. She blinked, yet still the wolf changed before her eyes, his gorgeous white pelt shortened until it transformed into bronze tinted skin.

A tall man with cascading golden hair and eyes the gray-blue of a stormy, summer sky stood nude before her. Seren blinked again. The man fluttered his hands in front of his body and suddenly he was clothed in an opened white, gold-speckled druid robe and plaid pants covered his trunk-like legs. Heat emanated from him.

She gawked at the lush bronze skin of his bare, muscular chest beneath his robe. “Druid robe...shape shifted from wolf to…” As realization dawned, she dropped to her knees. ”God Gwydion, it is you?”

Blogging Contest: To win a PDF download of one of these books, please comment with your email, the winner will receive the book of their choice. You must be 18 years or older to win or read The Wolf and The Druidess or Peace Love Music.

For more on these books, excerpts and blurbs, please visit my website at http://CelticRomanceQueen.com 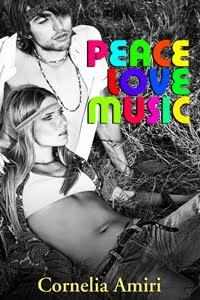 Posted by cornelia amiri at 8:49 AM