The Next Big Thing Blog Hop

As part of The Next Big Thing Blog Hop, I was tagged by S. R. Drum  in her post last week. The purpose of this hop is to introduce readers to writers and works that might be unfamiliar. This includes new releases or Works in Progress (WIP).  This is week 29 of the hop.

According to the rules of the hop, I will be answering the same questions as every other blogger on the hop about either my newest release or my WIP and then I’ve tagged Julie A'Darcy, who will do the same thing in her blog next Wednesday, 01/16/13. Visit Julie's Blog for the Next Big Thing Blog Hop http://magickandlipstick.blogspot.com.au/


What is the working title of your book?
Conquistadors In Outer Space, written under the pen name Maeve Alpin. It will be released February 1st, 2013.

What genre does your book fall under?
Steampunk/Erotica/Romance
Which actors would you choose to play your characters in a movie rendition?
Ana, the heroine played by Fernanda Andrade from The Devil Inside and Rodrigo Santoro from What To Expect When You're Expecting.


What is the one-sentence synopsis of your book?
Forbidden love… so strong… it spans the universe.

What is the longer synopsis of your book?

Thrown off the Spanish estate she worked at all her life, Ana, a milkmaid, seeks a new life. Disguised as a rich widow, she boards a rocket, to be blasted out of a huge cannon, and targeted for the newly discovered planet, X.  Sparks fly when she finds Ramon, the only man she ever loved, heir of the estate she worked on, is flying to Planet X as well. As the Spanish governor of Plant X searches for gold, the treasure Ramon seeks is Ana. His conquest is challenging, though he swears to protect and love her, as a noble he cannot marry a peasant. Ana cannot deny her desire for Ramon, but she will not be his mistress. Will his conquest of her heart succeed or will Ana make a life for herself alone amid the wonders and dangers of Planet X.

Will your book be self-published or represented by an agency?
The publisher of this book is Eternal Press. I have several other books with them under the name of Cornelia Amiri as well as another Steampunk/Romance, To Love A London Ghost, under the name of Maeve Alpin.

How long did it take you to write the first draft of your manuscript?
Conquistadors In Outer Space is a novella of 30,000 words, so the rough draft or first draft took four weeks.

Who or what inspired you to write this book?
In 2000 I participated in a historical re-enactment of  the Hernando De Sota North American expedition of 1541 in Parkins Arkansas at the Parkin Archeological State Park. It's located on the spot De Sota and his men visited, a Native American village stood there from A.D. 1000 to 1550. Then when I saw flying ships in the latest Three Musketeer movie I decided to bring steampunk to my conquistadors. I've always loved Jules Verne's book From The Earth To The Moon and in a nod to it I added giant cannons to my story and sent my conquistadors into space. I used alternate history to enhance inventions of Leonardo De Vinici and discoveries of Galileo Galilei, though the steampunk in Conquistadors In Outer Space is based more on fantasy than working science.

What else might pique the reader’s interest?
Though Conquistadors In Outer Space is an erotica romance, the heroine, Ana, doesn't have sex with Ramon until they are married. Also there are aliens on the planet they land on and these natives have a special way with their hands. I won't explain that any further as I'm leaving it as a surprise and special treat to everyone who reads the book. 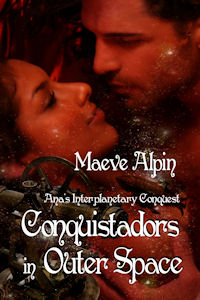