I haven't blogged on my own blog in awhile so I thought I'd start out by doing book reviews. These reads all have a bat theme. 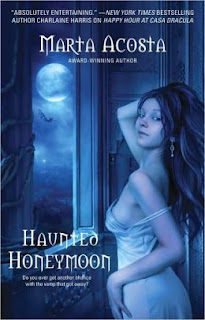 When Haunted Honeymoon begins Milagro is still torn between her feelings for her vampire boyfriends Ian Ducharme and Dr. Oswald Grant, her ex. Now there’s an added character in the mix, she’s found a vibrant lover who is fun to be around, Wilcox. She loves his name. It’s a wonderful name. Also Don Pedro is back, and due to a large advance he’s paying her, she’s ghost writing another book for him.

Then, tragedy strikes, there’s a murder of one of the above, and she gets a case of amnesia because of it. She’s in denial of being a vampire or even of acknowledging the existence of vampires.
Milagro has to discover who the murderer is, convince the Vampires Council she didn’t’ do it, keep safe from the killer in case they come after her, recover from her amnesia, chose between Ian and Oswald, and write that book for Don Pedro.

This is the forth and I believe final book in Marta Acosta’s award winning Casa Dracula series. The others, in order, are Happy Hour at Casa Dracula, Midnight Brunch, and The Bride of Casa Dracula. She attended Stanford University, receiving degrees in English and American Literature and Creative Writing. She is also the author of an award winning young adult book, Dark Companion. In addition she wrote a comedy book, Nancy’s Theory of Style, under the name of Grace Cooper Smith.

I love Marta Acosta’s multicultural/romantic/comedy/vampire series. It is one of my favorite and one of the best vampire series out there. The main character is so believable, easy for any woman to relate to. Every woman on some level is or has a friend like Milagro. Like all the other books in the series, Haunted Honeymoon did not disappoint. I highly recommend this fun read. In fact, I recommend the entire series. 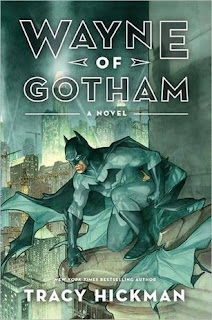 Justice Is blind. In Wayne of Gotham a story unfolds of what made justice blind in Gotham, why that was bad, and how bad that it got. Batman, Bruce’s father, Thomas Wayne is at the center of the tale. Secrets are revealed such as why Thomas Wayne was killed and why Gotham is so ridden with strange costumed villains.

I attended Tracy Hickman’s reading at Space City Houston earlier this year. He said that when discussing what book he might write next, his agent brought up the idea of a super hero. The author deiced if he were to write about any super hero it would be batman because he had no actual super powers. He told us about a fond memory form childhood when he and his brother saw the bat mobile at a car show. The author did an excellent job of describing the bat mobile and its technical features in the book. He did his research into the entire history of batman and kept to the traditional story so fans of the original comic will not be disappointed.

The book is action packed and intriguing. The character of batman, Bruce Wayne, is well flushed out as is that of his father, Thomas Wayne. This is an interesting, enjoyable read and I highly recommend it. 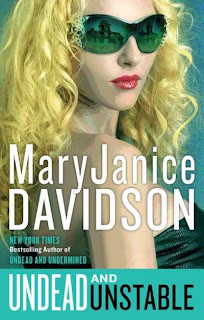 “Out I went into the deep November cold, searching for some meaning in all the crazy shit that had been happening since Giselle got me killed a few years ago. And I was also searching for a shovel. And after this yuk-o errand, I would be searching for a booze smoothie. Ah , the glamorous life of a vampire queen.”

In the first chapter, Betsy finds her cat, Giselle has died. The relationship between Betsy and Giselle was based on the cat hanging around because Betsy fed her. Also the first time Betsy got killed, she was trying to coax Giselle into coming out of bad weather when a Pontiac Aztek ran her over Betsy. However, Giselle got off without a scratch.

So Betsy buries her cat, but like most beings at the mansion, she doesn’t stay buried. Betsy’s roommate Marc, recently dead, doesn’t stayed buried either. Marc is now a zombie and so the book Undead and Unstable begins. This is the eleventh book of the Betsy the Vampire series but there are many more stories of the Vampire Queen in Mary Janice Davidson’s anthologies and novellas.

If you’ve been following the series, you know the book of the dead is supposed to be made of the skin of her husband, this is something she is apparently going to create in the future when the whole world is a frozen waste land. She spends most of the book trying to find a way to change the future. Betsy can’t imagine ever harming her husband, Sinclair. She comes up with a surprising solution, which also brings an added benefit for Sinclair.

Undead and Unstable is a funny, zany, fun read. I’m so glad that unpleasant business of future Sinclair getting skinned alive and made into the Book of the Dead is over. Hopefully it is, with this series you never know. For humorous, chick lit type romance reading, I recommend the entire series, including this latest book, Undead and Unstable.
***
Posted by cornelia amiri at 7:42 AM