St. Andrew is the patron saint of Scotland. And St. Andrew's Day is a Scottish Holiday.


Last night at midnight as the day changed from the 29th to the 30th of November, young single woman might have peeled an apple so the peel stayed in one piece and threw it over their shoulder it would have formed in the shape of the first letter of the name of their future husband. Or if they dropped molten lead or candle wax in a pail of water it would form in a shape that would reveal the occupation of their husband to be.


Have a Scottish desert today to celebrate—a cranachan

And a great read for St. Andrew's Day is the box set Warrior Hearts. 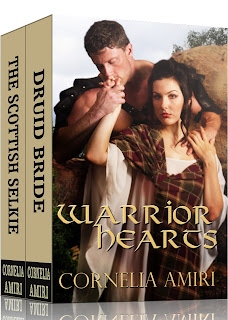 From the land of the Picts, spring two tales of ancient tattooed warriors, wielding longswords in the fight for freedom and love. The fate of Caledonia rests in the hands of the Warrior and the Druidess. But Brude is not about to marry a druidess, never mind that his blood boils for her and he can’t stop thinking of her. Can Brude and Tanwen put their differences aside and fulfill their destiny? Bethoc aims her bow at King, Kenneth Mac Alpin, but she misses her mark. To save her life, she is forced to wed the king's cousin, Malcolm. Just as the Scot Warrior and the Pict Princess begin to forge a bond, Malcolm must reveal his incredible secret and choose between two worlds: one with Bethoc or one without.