The first day of Winter is December 21st. That is the Winter Solstice. I wrote a book set during the Winter Solstice, The Bear and the Druidess. It's the third book in my Shapeshifting Celtic Fantasy Romance series, Druidry and the Beast. 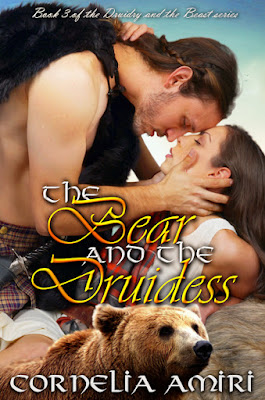 Sometimes a secret must be revealed to move from the winter of love into its spring.

Romans stole all the winter grain from Druidess Bronwen’s tribe. Now, pursued by Romans, she ducks into a cave to hide. There she finds a handsome warrior who offers to help. He ignites a fiery spark of attraction within her but she can tell he’s keeping something from her.

The prayers of a beautiful druidess he can’t resist lead the Bear God Artaois into the cave where Bronwen is hiding. He pretends to be asleep until she finds him.

Artaois (Art) is determined to spend the longest night of the year with her. But Bronwen doesn’t realize he’s a god. He keeps his secret from her and even though he can transform into a bear, he only reveals himself in human form.

With the Winter Solstice upon them, can Artaois (Art) find a way to save her tribe from starvation? And, when Bronwen finally discovers his secret, will she leave the romance building between them out in the cold.

So, what is the Winter Solstice, you may ask. You know it's the longest night of the year. But, why and how did the ancient Celts celebrate it?

Well, it’s December 21st to 22nd, when the shortest day and the longest night of the year fall in the Northern Hemisphere. In Welsh they call the Winter Solstice  Alban Arthan (Light of Winter).

They also had wren hunts, signifying the death of the Holly King. In Ireland, Wales, and the Isle of Man, Lá an Dreoilín, (Wren Day) was celebrated on December 26. Wrenboys dressed in masks or straw suits, usually had a hobby horse covered in a sheet, and it had strings that could close their mouths and make their legs kick. Wren boys were led by a captain and a boy who dressed as a female captain. These boys hunted and killed a wren as a tribute to the light for overcoming the dark. They’d set the dead wren in a box decorated with evergreens on a pole and go from house to house asking for food and good cheer. The wren was buried at the end of the rounds. Nowadays, they use a fake wren instead. Both the Holly King and wrens are associated with the Welsh god Bran.

For the Winter Solstice, ancient Celts decorated Yule logs with holly and ivy, which are linked to the God Bran. Usually, they sprinkled ale or mead over the log before they lit it. They kept it slowly, yet steadily burning for 12 days in the fireplace before extinguishing it. To pass the light on from one year to the next, they kept part of the unburned log safely to one side and used it to light next year’s Yule log. Also, they stashed the log’s ashes away until spring, at which time they mixed them with seeds and scattered them on the fields, spreading the blessing contained in the Yule log over the land.

Mistletoe and oak were sacred to the ancient Celts. As an evergreen plant, Mistletoe symbolized continued life over the cold dark winter which is why druids picked it from oak trees five days after the new moon following the Winter Solstice. One druid climbed the tree and cut the mistletoe with a sickle, while others held an open sheet beneath him to catch the sacred plant since it was taboo to let it touch the ground. The druids handed out sprigs of mistletoe to tribesmen who hung them over entranceways for protection. Mistletoe is also believed to be an aphrodisiac, so this might be where the holiday tradition of ‘kissing under the mistletoe originated.

The Celts' livelihood depended on what they could raise, grow, or hunt. So, the long, cold days of winter were hard on them. Since they didn’t have enough grain to feed all the cattle during winter, many were slaughtered at this time. This meant fresh meat for the winter solstice feast. Also, ale and mead brewed during the year fermented by this time and were ready for drinking.

Posted by cornelia amiri at 9:04 PM