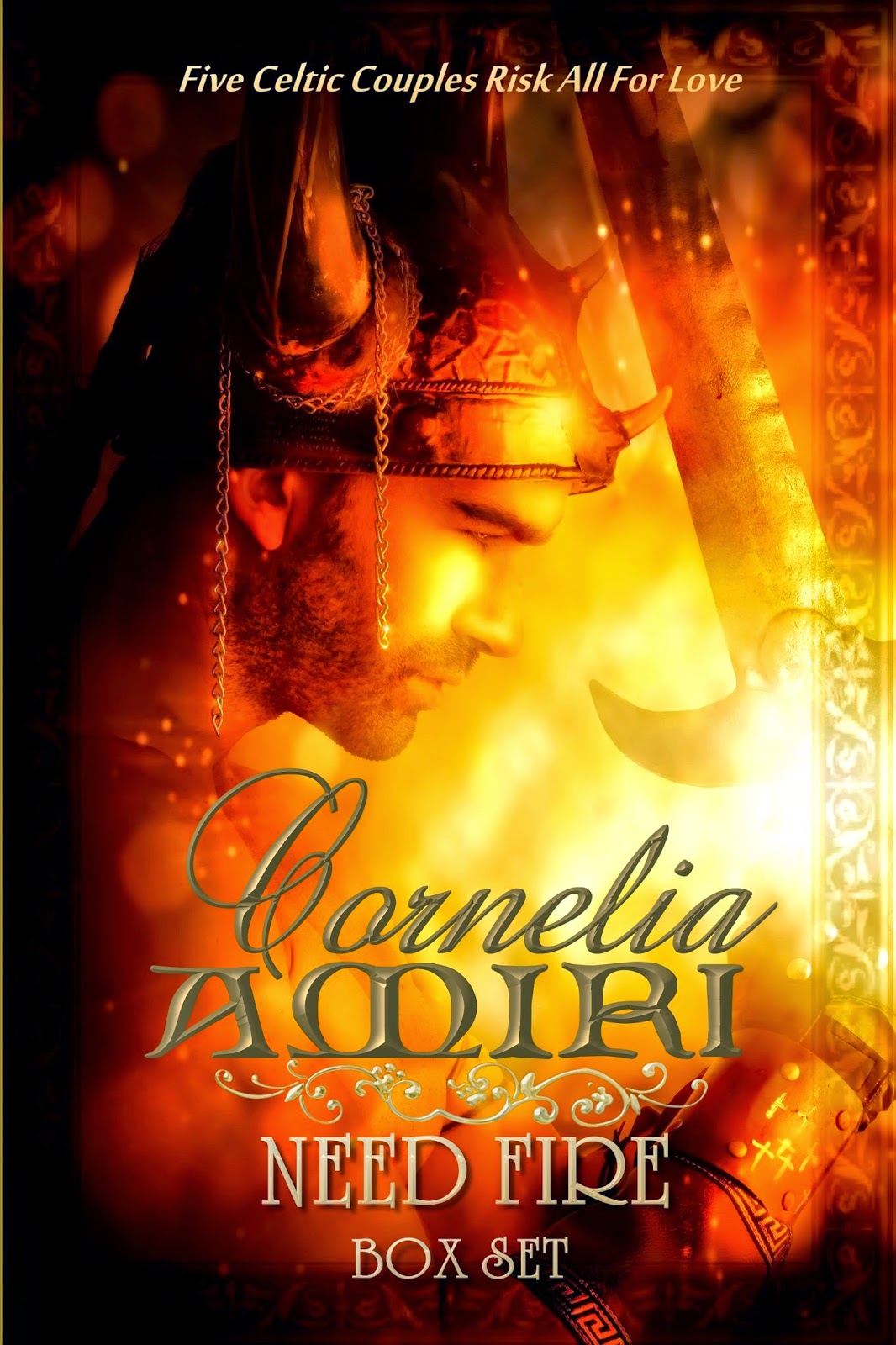 
As my website says I write about Celtic long swords, hot heroes and warrior women. A need fire is a ritual bonfire used at the ancient Celtic fire festival of Beltane. Many people nowdays celebrate May Day in place of Beltane. The words need and fire also conjure up images of a hot romance so I thought it would make a perfect title for this box set of five Celtic romance novellas.

Timeless Voyage
Off the mist shrouded coast of Ireland, a lady pirate, Anwen, captures the enemy, a Roman, Titus Rufius Kaeso. The Celtic warrior woman presses her hard iron dagger against Kaeso’s throat, but memories of fated lovers, druids and sacrifice, stay her hand.
Kaeso is also captivated by dreams of the woman he loved in a previous life, the mirror image of Anwen. In this lifetime they are foes, Roman and Celt. Can Anwen and Kaeso steer their timeless voyage to a happy destiny or will they be robbed of love once more?

Eigyr is the woman the gods meant for King Uthyr. The lady who will bare his children as foretold by the fiery dragon comet, but there’s one problem…she’s marred to one of his dukes. The sensuous powerful king awakens Eigyr’s lust but she will not break her wedding vows. Driven by a deep, overpowering desire, Uthyr would do anything to have but one night with Eigyr.
The king’s druid, Menw holds the answer to Uthyr’s dilemma. Magic. But at what cost?

Moon Goddess Wife
From Welsh mythology springs the tale of Rhiannon and Pwyll. Chief Pwyll's life is changed forever the day Goddess Rhiannon rides pass him on her magic horse. Forbidden romance smolders between the goddess and the chieftain. With the use of an enchanted bag, Rhiannon breaks free of an unwanted betrothal. Happily, she weds Pwyll, but a harrowing mystery tears them apart. Will Pwyll's suspicion and duty as chieftain prevail or will love win out?

A Fine Cauldron Of  Fish

Some Vampires Shimmy
6th in the Dancing Vampire series
Afric and Foomna, the last of the dancing vampire sisters, shimmy and strut their way into belly dancing at a Scottish Steamapunk Con. It’s all sizzle and steam when they get together with a sexy rock guitarist and a hot looking god at the con. Afric swore she’d never love a human but Kade’s got her tied up in Celtic knots with the exotic pleasures of his shibari rope. The War Goddess Morrigan commands Afric to cut her ties with her human lover. Afric’s caught between pleasing her goddess, her sister, and her man. What will it take for Afric to follow her own heart and where will that path lead to, the Earthly Realm or Underhill?

Posted by cornelia amiri at 9:40 AM